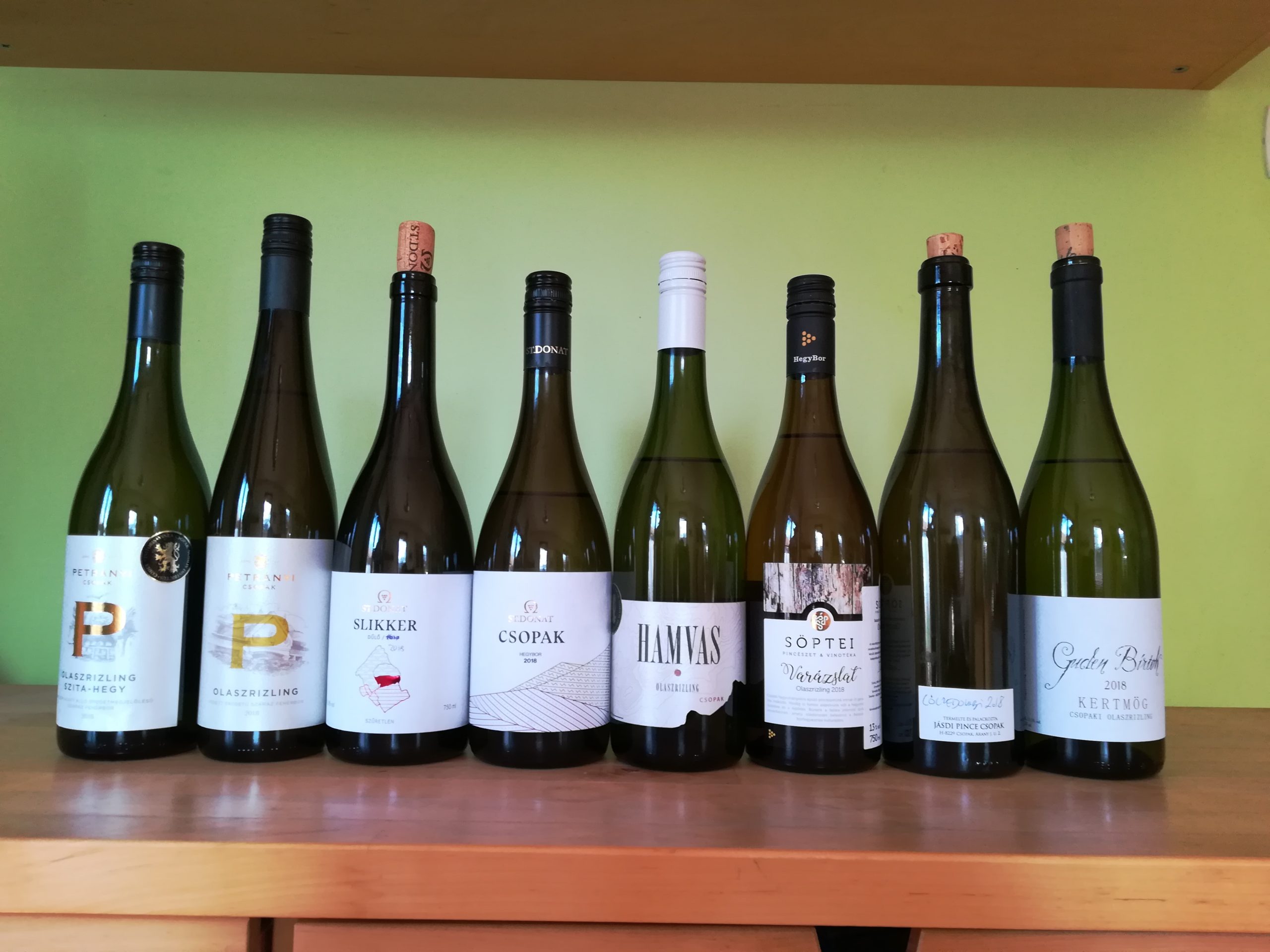 2018 on paper looked anything but promising for great whites. A rather short growing season coupled with sustained summer heat is usually a recipe for disaster, resulting in flabby, bland, sometimes tart wines. However, the handful of 2018s I have tasted so far seemed charming and inviting. So, I approached the 2018 Csopak Kódex wines with a cautiously optimistic mindset. With the moderate alcohol stipulated in the Kódex regulations heavy and heady were out of the question but that still left the door open to dullness.

Sweeping generalizations, even in a small country like Hungary, hardly ever work. According to Tamás Kovács (Szent Donát) the growing season in Csopak was hot but not particularly dry and thanks to the favourable conditions at flowering and fruit set 2018 delivered a bumper crop (a 50% increase relative to 2017). The watershed moment came in early September when 200 millimetres of rain fell delaying harvest by 2-3 weeks and causing a double whammy: dilution and loss of acidity. Those who picked before the rains harvested quality fruit, those who didn’t had to settle for lesser quality.

There are 7 Kódex wines altogether in 2018 and we received 5 for our tasting (the 2 missing ones were both from Homola, Sáfránkert and Hajnóczy (deemed too young for showing)). I decided to complete the line-up with 3 Hegybors from 2018 and as a bonus there were 4 more Kódex wines from earlier vintages which we tasted separately. Our overall impression was that the 2018 wines were reliably good but seldom outstanding.

We followed our usual system of scoring: each taster named his/her top 3, and then 3 points were given for each no.1 position, 2 points for no.2 and 1 point for no.3. The wines were tasted blind.

My notes and scores:

Excellent start. Pretty, precise and typical. Intense, floral, with beeswax, apples and peach in a lithe frame with good drive. A wine to rival the 2018 Sabar Birtokbor. 6 points

Quite weighty with good acidity, even some salinity. Vanilla & brittle mingle with almonds, peaches and some vegetal notes on the nose. Somewhat grippy on the finish and unfortunately it loses focus towards the end. I’d prefer less oak influence but still a nice package. 5 points

A shy nose giving away very little, mostly raw wood and citrus. The palate is zesty and bone dry with no fruit but quite a bit of mineral, metallic tartness on the finish. A work in progress? 4-5 points

Almost golden, very different from the rest. Intense nose with obvious signs of botrytis showing pears, dried apricot, nestea, honey and iron. The palate is big and complex with sweeping acidity but good balance. Bags of character. Convincing on its own but rather offbeat in the present context. 5 points

Top quality oak is a bit obvious at the moment but not overwhelmingly so. A Burgundian take on Csopak Olaszrizling. It’s not the most colourful wine but it is balanced, round and appealing. Long life ahead. Excellent winemaking. 7 points

The most complete wine in the 2018 line-up. It’s got everything one is looking for in a Csopak Kódex wine with the added benefit of being attractive. A typical Olaszrizling nose of meadow flowers, honey, marzipan, peaches and red apples. The fruit on the concentrated palate is enlivened by a pinch of salt and complex acidity. Faultless balance. A timely return to form after years of out in the wilderness. 7 points

Austere, tight and unyielding, a kind of Olaszrizling brut nature. It’s got structure and stature but lacks any charm or appeal. Stripped down to the bones. Perhaps bottle ageing will add some flesh and colour. 5 points

Not much change since last year. Both are taut, firm, somewhat green and bordering on sour with quite a bit of oak. They made few friends at our table. 5 pointish.

This is just great. An amazing wine showing no signs of ageing. Definitely the wine of the night. It’s got power, style, complexity and intrigue. Knocked my socks off. 8 points.

A very different beast from the 2018 Söptei Hegybor. In its prime. Lovely mature nose and beautiful balance. Nothing flashy but eminently satisfying. 6 points.

A few days after the tasting Ambrus Bakó, the winemaker at Petrányi called me on the phone to tell me that something has gone wrong with the Petrányi Szita-hegy lot so it’s not going to be released. We were lucky that our bottle was unaffected. 3000 bottles of an excellent wine going to waste. I was left dejected. (Truth to be told, a month ago I received a bottle of Szita-hegy from a friend living in Balatonfüred and that particular bottle did show some faint fruit vinegar-like notes.) So, in some ways our tasting was beheaded: the runaway winner doesn’t even exist.